Covid 19 Crisis
We are open and able to ship available stock to you same day. HQ staffing reduced so some tasks (e.g. answering phones) might take longer.
Some restrictions on site visits. Please call and we shall do all we can to help. 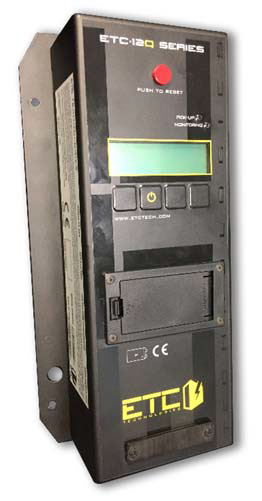 The ETC‐12Q is manufactured and marketed by ETC Technologies of Milford Connecticut, USA.

ETC Technologies is associated with Satin American of Shelton Connecticut and RESA Power of Houston Texas.

What is DINF and why is it important

DINF is a “breaker protection function” that must be provided by the trip unit on the breaker. It provides the Instantaneous close‐on‐fault protection required to protect the breaker when closing on fault currents that are above its Close and Latch rating.

If the MasterPact M & MP circuit breaker closes on a fault current above its Close and Latch rating, the mechanism is unable to latch the breaker into the closed position due to the extremely large electromagnetic forces created by the fault current. Unless the breaker is instantly tripped open by the DINF function, the breaker will be severely damaged.

Without proper DINF protection, rapid breaker contact bounce causes breaker damage during the attempt to close into a fault above the Close and Latch rating. The contact bounce occurs when the mechanism is unsuccessfully trying to latch the breaker into the closed position against the electromagnetic forces of the fault. Additionally, interruption of the fault current will be delayed if the DINF function does not operate properly.

Based on Schneider/Merlin Gerin documentation and testing at a high‐power laboratory, the DINF feature on MasterPact M and MP breakers must cause the breaker to interrupt a fault in no longer than 30 milli‐seconds after closing onto the fault.

The test setup included a primary injection high current test set. No auxiliary control power was applied to the ETC‐12Q. The breaker was closed onto the test set current which simulates a real condition where the breaker closes on a fault.

Summary of Results for DINF Tests

The ETC‐12Q tested for this report is a repackaged version of the original ETC‐12Q trip unit. The original version was also found to have DINF trip time issues and when tested on a MasterPact MP breaker at a high‐power laboratory, the breaker was destroyed.

DINF test details and scope traces are included below.

The FlashSAFE is a maintenance setting for arc flash reduction during downstream live maintenance.

Therefore, due to the slow DINF trip time and unreliable DINF operation as well as the slow Instantaneous trip time, the ETC‐12Q is unattractive as a replacement trip unit for the MasterPact M & MP breakers.

Figure 1A: Test current 6140A. DINF trip should have occurred to protect the breaker, but it did not.

If you're experiencing problems with your breakers please call us directly. We operate a 24/7 emergency call out service in support of air circuit breakers, we carry spares for ABB, Terasaki, Mitsubishi, Schneider, Merlin Gerin, Square D & Moeller.